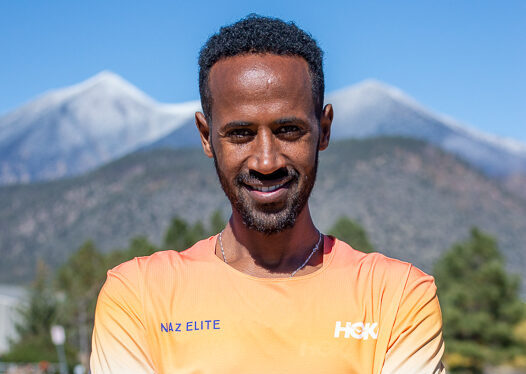 FLAGSTAFF, (AZ) – October 25, 2022 – HOKA Northern Arizona Elite announced today that American distance running standout Futsum Zienasellassie will be re-joining the team, effective immediately. This will be Zienasellassie’s second tenure with NAZ. He originally ran for the group from the spring of 2017 through the fall of 2018.

Since his departure in 2018, Zienasellassie has proven to be one of America’s top road racers, winning the USATF 10 Mile Championships and the Monterey Bay Half Marathon in 2019, the Great Cow Harbor 10k in 2021, and setting a personal best of 1:01:21 for the half marathon.

Zienasellassie said having the opportunity to rejoin a team that’s excelling on the track, and on the roads, was a no-brainer.

“I have always wanted to be part of a team that would allow me to do both track and road racing, even though, moving forward, the marathon will be my main focus,” Zienasellassie said. “I believe the marathon is a distance where HOKA NAZ Elite has achieved great success, and I am grateful the team has once again provided me the opportunity to train and compete at a professional level. Flagstaff has been home for my family and I for the past ten years and hopefully this will be a partnership that will last many more.”

Zienasellassie joins a roster on the men’s side that looks vastly different from the one he left back in 2018. He will now be training with NCAA champions Olin Hacker and Wesley Kiptoo, South African national record holder Adriaan Wildschutt, 27:45 10,000 meter man Alex Masai, 2:12 marathoner Nick Hauger, and former Northern Arizona University teammates Matt Baxter and Tyler Day.

HOKA NAZ Elite head coach Alan Culpepper was vital in bringing Zienasellassie back to the team and is looking forward to having him train alongside the group’s current roster.

“As a coach you are always excited to add a new athlete that you know has the talent, drive and discipline to be a champion and Futsum has all those characteristics,” Culpepper said.” His addition compliments the group on so many levels and I am excited to watch him thrive.”

HOKA NAZ Elite’s executive director, Ben Rosario, who coached Zienasellassie in 2017 and 2018, was just as excited as Culpepper.

“In my role as executive director, one of my jobs is to serve as the team’s general manager and to work with HOKA to ensure that our roster puts us in the best position to succeed on the national and global stage,” Rosario said. “In Futsum we get a great human being first of all, and someone all of us like on a personal level, but also an athlete who we believe can be one of the top American marathoners for the next several years, and can continue our streak of finishing in the top ten at World Marathon Majors year in and year out.”

Zienasellassie is scheduled to compete for HOKA NAZ Elite at the USATF Marathon Championships in Sacramento on Sunday, December 4. It will be his debut at the marathon distance.