2022 Performance of the Year Tournament!

Welcome to our 2022 HOKA NAZ Elite Performance Of The Year Tournament, voted on by you the fans!! Fill out YOUR ENTIRE BRACKET HERE to pick our best performance of 2022. Voting begins on Saturday December 10th at 5:00pm ET and ends at 8:00am ET on Tuesday, December 13th. The winner will be announced at our NAZ Elite Holiday Party that night!!

In a very close battle you selected Futsum Zienassellassie’s USATF Marathon Win as our 2022 Performance of the Year. Congrats Futsum!!

Steph won her third national title in thrilling fashion against a great field, and set a Great Cow Harbor 10k course record in the process (31:52).

Julia, after nearly two years of fighting illness (including a nasty cold the week of the race), ran her second-fastest marathon ever (2:30:35) to finish 10th at the USATF Marathon Championships in Sacramento.

In her long awaited debut marathon, Alice ran an incredibly smart race–eventually finishing in second place (2:29:08) courtesy of a sprint-to-the-finish in the last 200 meters.

Aliphine had not finished a marathon since winning the Olympic Trials Marathon in February of 2020. She came back in style by finishing 7th place (top American) in a PB of 2:26:18 in NYC. PC: Ed Cotton

Steph had a phenomenal year overall, with one of her highlights certainly being the Boston Marathon where she finished 12th place in 2:28:02 (the second fastest time of her career).

Steph’s career came full circle when she won the 10,000 meters at the North American, Central American and Caribbean (NACAC) Championships in the Bahamas. She had won the U23 title at the same meet, in the same event, in 2006. Futsum re-joined HOKA NAZ Elite in October (he had been on our team in 2017-2018) and promptly got to work. On December 4 he made his marathon debut and blitzed the field over the last 7k at the USATF Championships in Sacramento, winning the race in 2:11:01.

Steph Bruce, Krissy Gear, Abby Nichols, Lauren Paquette, and Katie Wasserman went to the USATF Club Cross Country Championships in San Francisco to try and take home the Team title. Unfortunately they did not get it done, but they finished in third place and we want to celebrate all the hard work they put in during the fall. They were ready.

Wesley was the first of six new athlete signings we made in 2022. He came on board in April and in the first weekend of May he showed he belonged when he won the Pittsburgh Half Marathon (his debut at the distance) in 1:01:25–a course record and an NAZ team record. 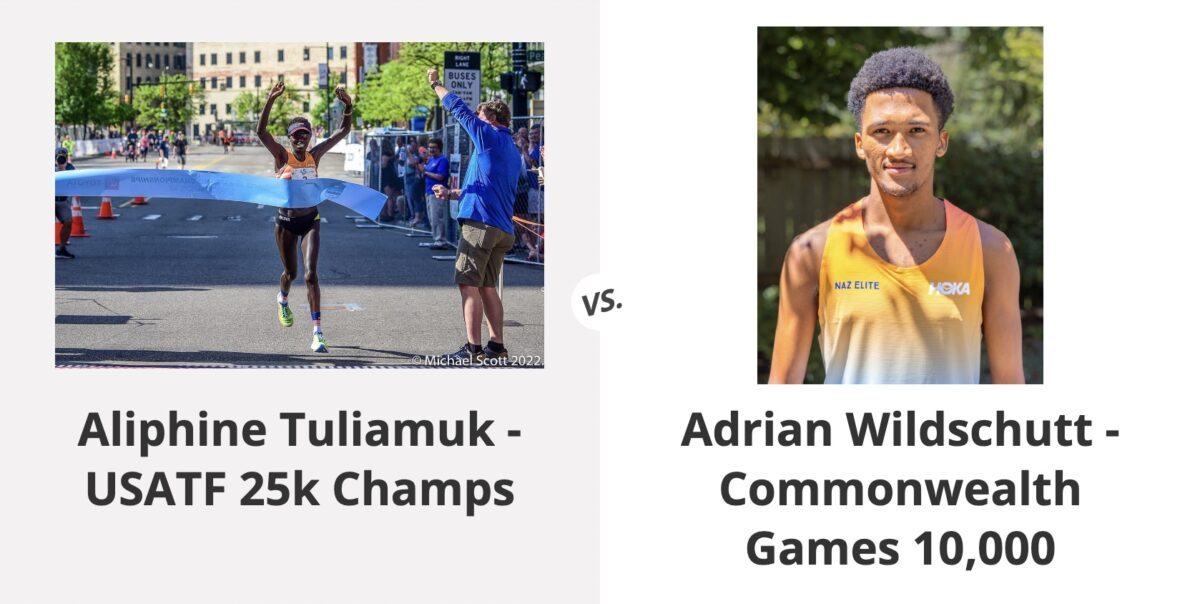 After a long hiatus following an injury that forced her to drop out of the 2021 Olympic Games Marathon, Aliphine began racing again in May of this year. In her second outing, she proved she was back and better than ever when she won the USATF 25k Championships by 45 seconds over pre-race favorite Keira D’Amato.

Adrian signed with HOKA NAZ Elite after the NCAA Championships in June but we didn’t announce him until our entire spring recruiting class was complete. Thus, this race didn’t get a lot of hype but he was sporting his HOKA spikes when he finished fifth at the Commonwealth Games 10,000 for South Africa in 27:41.04–a new team record.

In December of last year we were down to four male athletes on our roster. 12 months later we were finishing second as a team at the Cross Champs, behind only the On Athletics Club and ahead of nearly all the other top teams in the country. Wesley Kiptoo (6th), Olin Hacker (7th), Adrian Wildschutt (14th), and Alex Masai (23rd) were our scoring four with Ben Bruce as our fifth.

After two podium finishes without a win, Aliphine finally made her way to victory at the famous BOLDERBoulder 10k. A 4:50 fifth mile shattered the race open with Aliphine eventually crossing the line in 32:58 (a smoking fast time at altitude).